The War Memorial Steering Group (WMSG) is an advisory group to the Parish Council. All decision that are made by the WMSG need to be recommended to the full Parish Council for full approval.

The aim of the WMSG is to place a new WW1 and WW2 war memorial on the car park at St Andrews Church, Fairlight.

The memorial is to include all names of residents and service men/ women who lost their lives in these wars. 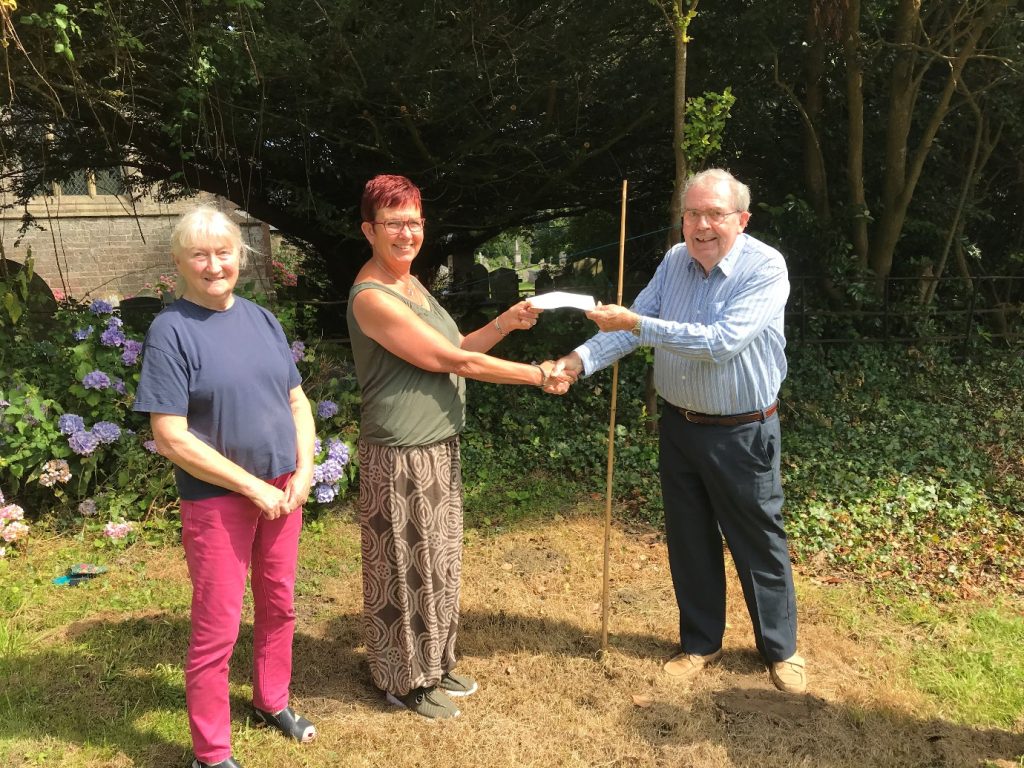 Receiving a cheque for £750 to kick start the fund to erect a new War Memorial for Fairlight is Haydon Luke, Chair of the Steering Group. The donor is Kerry Gentleman, organiser of the Open Gardens event which took place on 10th and 11th July. The location is the site of the proposed new War Memorial just outside St Andrew’s Church, Fairlight.

The War Memorial fund was one of four local organisations to benefit from the proceeds of the Open Gardens weekend which was a great success despite poor weather on the Saturday.

Fairlight’s project to create a new memorial is to put right a long-standing anomaly. The existing memorial plaques inside the church do not record all the names which ought to be acknowledged. Recent work by Paul Draper, village archivist, has revealed that there should be an additional 9 names for WW1 and 13 for WW2 – a total of 47 names.

As well as putting the historical record straight the new memorial is intended to provide an outdoor focus for remembrance events – something that has been lacking in Fairlight.

One of the perils of writing articles for Fairlight News is the risk that something written several weeks ago can be overtaken by more recent events.

This is the case with the most recent issue.

Firstly; our appeal for help with plan drawing and submission. Malcolm Holmes has stepped forward to take on this role – for which many thanks. So no further appeal needed in that direction.

Secondly; the main and enduring news is that the work to achieve a new, more complete and more fitting memorial is on track.

However, following further consultations and discussions on site with St Andrew’s churchwardens, there has been a rethink about the location. Instead of siting the memorial about 8 metres to the left of the path leading up to the church porch, it will now be 8 metres to the right of that path. The footprint of the plinth has been reduced and the memorial will be turned about 45 degrees from the line of the churchyard railings so it will face visitors as they turn into Coastguard Lane and into the church car park. A new visualisation will illustrate this.

A public appeal to help fund the project will be launched soon and an information panel will be put up in the Village Hall shortly to inform residents of progress on the project. Later in the summer the Fairlight History Group will put on an exhibition in the Village Hall over the Open Gardens weekend (10/11 July) illustrating Fairlight in the two world wars to act in part as a fund raiser for the project.

Finally, we are in the final stages of verifying all the names to be inscribed on the memorial. If you, or a family member believes you have the name of a Fairlight casualty of either WW1 or WW2 which should be included, please contact Paul Draper.

Despite the problems of the pandemic and the interruption to normal life, the WMSG has attempted to keep up the momentum of the project and has held two virtual meetings. Three firms have been approached. Advice was received from all and quotations have been received from two firms of monumental specialists. Originally the group hoped that local stone might be sourced and used but the unanimous advice of the stonemasons was that it is not durable enough.

The group’s preference for the specification of the stone is as follows:

• A rough-hewn granite monolith, at least the height of a person, (therefore around 6-7 feet, 190cm tall) and at least 2 feet (70cm) wide. The illustration below conveys the general idea. The exact size of the stone will depend on availability.

• It will be set direct into the ground into a rectangular base around 2-3 metres square finished with granite chippings. The memorial will be secured in the ground by steel rod fixings.

• Directly into the stone will be carved the names of the casualties, in two sections, one for WW1 and the other for WW2. The group considered having the names on inset bronze plates but were advised against this because of the risk of metal theft.

• We propose that the names should be arranged alphabetically by surname with rank, first name, initial, honour or decoration, and age. We believe the parish’s civilian casualties should also be included. At the present estimation there are around 44 names to be included. A list will be produced for final approval. The group is keen to ensure that all relevant names are traced and included. Work on this is ongoing, led by Paul Draper, and in consultation with the Commonwealth War Graves Commission.

• The lettering will be cut directly into the stone, highlighted with black, in a sans serif font as recommended by the stonemasons for durability and legibility.

• At the top of the stone would be a simple inscription “Lest We Forget”. It is not intended that there should be any other symbols on the stone.

The group’s preferred location is between two trees approximately 8 metres to the left of the access pathway to the church approximately on the line of the existing railings. This location is prominent and in an area that would be suitable for outdoor gatherings on e.g., Remembrance Day, for wreath laying. The Parochial Church Council supports this location as does the local branch of the Royal British Legion.

• In the light of comments from the PC, finalise the design and get re-confirmed prices from stonemasons.

• Progress the necessary permission (faculty) with the Diocese of Chichester. Fee payable.

• Obtain planning permission from Rother DC. Fee payable. FPC has agreed to fund this as it reduces the fee cost by 50%. In this connection we are appealing for anyone local with skill and experience in drawing plans to assist the project by preparing the basic plan for submission to the necessary authorities. It is hoped that this would be done ‘pro bono’ as a contribution to the project.

• Explain the project to the people of Fairlight via FRA News, FRA email scheme, Village Voice and, when possible, display panel in Village Hall. Seek donations from public and from grant awarding bodies and trusts. The Fairlight History Group has suggested holding a fund-raising exhibition for the WMP in the Village Hall in the summer (covid situation permitting) of Fairlight in WW1 and WW2. This might be combined with Open Gardens. Discussions are ongoing.

• Launch appeal for funds. The target is expected to be around £7000 to cover all costs. Request PC set up separate account to receive donations to the project.

• Seek out and contact other potential funders. Suggestions welcomed.

The WMG recognises that this project will only be achieved with the full support of the PC and the people of Fairlight. It is at this point, therefore, that we need to know whether the wider community does support the project – before any significant expenditure is incurred.

It would be good if the project could be concluded in time for Remembrance Day in November but that timescale might be too ambitious. The lead time for the stonemasons to produce the memorial is likely to be several months.

Skip to content
We use cookies to ensure that we give you the best experience on our website. If you continue to use this site we will assume that you are happy with it.OkPrivacy Policy